Understanding how to use Multipart Upload with the Storj DCS globally distributed, multi-region cloud-hosted S3-compatible gateway

Each part is an integral portion of the data comprising the object. The object parts may be uploaded independently, in parallel, and in any order. Uploads may be paused and resumed by uploading an initial set of parts, then resuming and uploading the remaining parts. If the upload of any part fails, that part may be re-uploaded without impacting the upload of other parts.

All of these parts are broken into one or more Segments by the Storj DCS Gateway based on whether the Part Size is smaller or larger than the default Segment size. While Multipart Upload is most appropriate for files larger than the 64MB default Segment size, the Part Size is configurable in applications that use Multipart Upload.

Multipart upload takes a single object and divides it into encapsulated pieces to be uploaded, with all the pieces representing the complete object. Once all the pieces are completely uploaded the platform will assemble the pieces into a single logical object. The purpose of providing multipart capability is to more easily resume and manage transfers of larger files so developers will want to take advantage of this capability within their applications.

As described below, mutlipart upload is a process consisting of: starting the upload, transferring each piece, and finally completing the multipart upload. Upon successful upload of the final piece, Storj DCS will logically reassemble the object, apply metadata and make the object accessible. During the multipart upload operation, you can get status of active upload operations and get lists of parts you have uploaded. More detail on multipart operations is provided in the sections below. 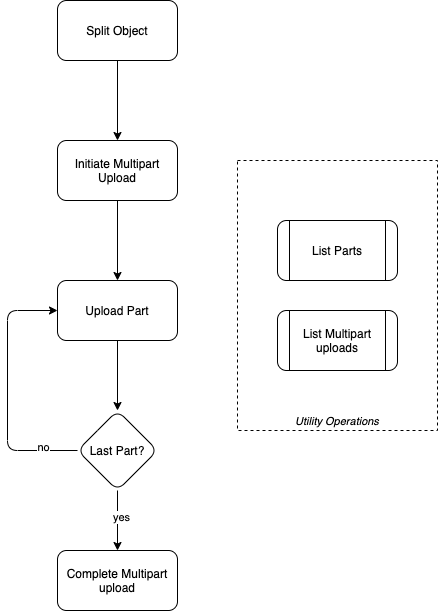 At the start of a multipart upload, Storj DCS will return an ID that you use to reference your multipart upload; you need to include this ID when working with the object. Operations such as uploading parts, listing parts and canceling the multipart operation.

Be advised that billing occurs when data is stored on the Storj DCS platform - as such - when you initiate a multipart upload and begin uploading parts, charges will be applied based on the amount of space the parts occupy. Billing will occur regardless of a multipart upload being completed.

To call the complete operation you need to provide the list of ETags and their corresponding part IDs. You should maintain this list in your application.

If you decide to cancel the multipart operation, you must provide the object key and multipart ID you received when you initiated the multipart upload. Space that was used during the multipart process will be freed when all the active multipart transactions have been completed and the abort operation has been called.

During a multipart upload you can list active upload transactions or the parts that have been successfully uploaded. For a single list parts request, storage DCS will return information up to a maximum of 1000 parts. For objects with more than 1000 parts, multiple requests are required. Because of the distributed nature of Storj DCS, you should not use the response from listing multipart uploads as input to complete in multipart upload operation. Be advised that part listing requests will only return completed part uploads - any active part uploads will not be returned.

Depending on the behavior of your application it may be possible for multiple concurrent operations to be performed on the same object key. It may occur that an application that sends multiple requests for the same object during a multipart operation would cause that object to ultimately not be accessible. One example would be permission changes or object removal while a multipart upload is in process for a specific object. The multipart operation may successfully complete , however, the operations received on that multipart object would change the availability of that object when the multipart upload is completed.

Updated 23 Sep 2022
Did this page help you?
Yes
No
UP NEXT
Multipart Part Size
Docs powered by archbee